A few years ago I started the new tradition of sharing a more realistic holiday newsletter. You can read the first here and the second here. Now it’s time wrap up 2016. Hoo boy.
Hey, friends! Let’s be honest and admit 2016 sucked in almost every way possible. Somehow the Yardleys managed to soldier their way through it, because we’re not smart enough to lie down and quit after we’re knocked over. LUKE spent pretty much the entire year with allergies, an inhaler, and breathing treatments. He borrowed our daughter’s Sammy the Seal nebulizer and was simply adorable. MERCEDES won a cool haunted house but lost DAVID BOWIE. It wasn’t a fair trade and she wants her Glitter God back. NIKOLAI got into this weird Justin Beiber and Selena Gomez phase. Yes, it is too late to say you’re sorry.  NINA takes turns being delightful, turning sullen, and bursting into noisy tears. We think she’s most likely possessed by imps. LILIA is afraid to go into the bathroom because she thinks giant tarantulas live in there. We assure her that no, we only have deadly scorpions, but she refuses to quit screaming.
This year a dirty, starving, flea-bitten cat wandered upon our property and immediately claimed us as his humans. Now he’s our fat, sassy Lord of All. His true name is far too awesome and terrible to utter, so he deigns that we call him Marsh. Also, he hates you.  So bad. He’s absolutely wonderful and I’m grateful for him every day.
We hope you had a great year and that 2017 will be even better. Let’s do this thing! 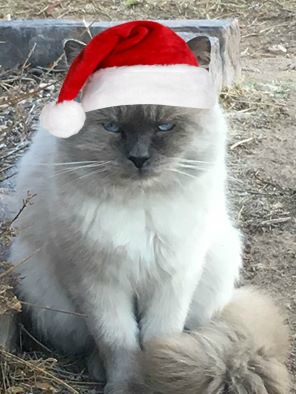 These truthful newsletters are so much fun to write, and make me chuckle when I look back on the year. Please let me know if you write one. I’d love to read it!