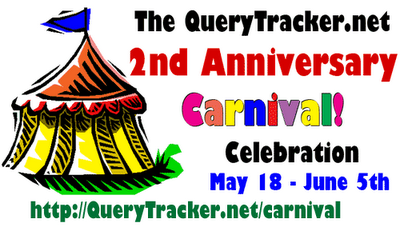 Once my husband and I went a Cirque du Soleil show.  There were these evil clowns roaming the audience beforehand, roaring and being generally creepy. I nearly climbed hubby’s body to get away.  I made him promise, on our marriage, that he wouldn’t let even get close enough to touch me, or I was going to come undone in a big way.  He was very heroic and held the suckers off.

But!  Onward!  Not all carnivals have clowns!

QueryTracker is turning two years old, and they’re having a bunch of contests!  Contests that I want to win.  Because I’m competative, mostly, but also because the prizes look pretty sweet.  A QT premium membership, a book on online marketing, a query letter critique (heavens knows I’d love that one!) and the grand prize is an author’s website.  Rock on!  You can find more information at http://querytracker.net/carnival.

Websites have been coming up a lot lately.  Should I have one?  Does it really matter?  Is going to mercedesmyardley.com any different than coming over here to my blog?  Will it somehow make me a more legitimate writer?

I dunno, but I stumbled across some author’s sites the other day that were just cool.  And I want to get me some of that action.  At some time, in the future.  I’ll put it on my invisible “to do” list, right behind “parasailing” and in front of “cage diving with great white sharks”.  Which would be awesome.

So!  I finished that essay, finally!  I am free from the chains that have hitherto held me bound. I also finished and submitted three interlocking poems to the “Terror in Miskatonic Falls” anthology, and submitted a literary piece to a contest.  I’m feeling pretty fat and sassy at the moment.  Oh, and my friend came over and spent the last two hours doing my hair for this thing that I have tonight.  She’s starting up a hairstyling business, and I’m going to be her walking billboard.  Forget the hair tossed up and held in place with chopsticks; I’m writing this post as a glamazon.   Mmm, yes.

In other news, I baked a cake last night and made the mistake of leaving it on the bottom shelf in the fridge.   My tiny daughter thought it was fantastic.

0 Comments on “Clowns Freak Me Right The Heck Out. Just Sayin’.”