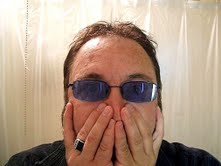 Broken Gopher Ink are a team of playwrights whose quirky and vicious “comedies” have been produced in theatres throughout the US and the UK. Starting in the 1980s, Broken Gopher Ink began a series of off-Broadway shows, which later became known for their nihilistic comedy and anti-theatre sensibility.
Claiming that all they wanted to be were “the Sex Pistols of playwriting”, Broken Gopher Ink followed a non-recognition ethic, which demanded focus on their work rather than on themselves.
Rumors abounded in theatre circles about their identity, but it is generally agreed that they are based in Colorado, and that there are from two to four members at any given time. Their best known play, “M.I.B.” was bastardized and made into a motion picture without their consent (“Men in Black”)[citation needed] and their monologue play “My Heart and The Real World” ran for almost two years, on and off, in New York until it was finally killed off by 9/11. Since then, “My Heart and the Real World” has been performed in the UK. Other plays by Broken Gopher Ink are “Stigmata”, “Murder in the Men’s Store”, “Confetti”, “Clazion Catches Light”, and “My Apartment.”

From our website:
BROKEN GOPHER INK are a pair of humble westerners whose delightfully crude and vicious plays have been produced all over the USA and small parts of Europe, but especially in New York City off-Broadway theatres, where BROKEN GOPHER INK acquired their bogus literary credibility. No one is sure who they are or what they want, but their deliciously low cholesterol mega-monologue play, My Heart and the Real World, has received eight separate off-Broadway productions (including two UK shows) thus cementing BROKEN GOPHER INK’s reputation as cult failures.
BROKEN GOPHER INK have no formal training or theatrical pretensions; all they ever aspired to be were the Sex Pistols of playwriting. Anti-theatreists and nihilistic comedians, their extremely reclusive stance is based on their hideous physical appearance and the sometimes obnoxious content of their more popular plays. They tend to become disoriented when held accountable for things they have written. They prefer to live in semi-lush obscurity with their debts and broken cars.
BROKEN GOPHER INK’s plays have been produced and performed by Love Creek Productions, The Harold Clurman Theatre, The American Theatre of Actors, The Quartz Theatre, The Soupstone Project, Beverly Hills Cable Access, Ironbound Theatre, to name only a precious few. Their fabulous and nonfattening plays, all of which have been aggressively rejected by the Denver Center, are: M.I.B. (1987), Murder in the Men’s Store (1988), Stigmata (1989), Clazion Catches Light (1991), Confetti (1993) My Heart and the Real World (1998) Hurt (2000) and My Apartment (2004). Their work has won numerous cheap awards, including the 1995 Love Creek One Act festival in New York City, which resulted in a visit from the unstable pair. A drunken fracas with their mentor, Oscar winning actor F. Murray Abraham ensued and their award was inadvertently given away to a pretty girl in a bar.
“Since the bloody fall of 2001 BROKEN GOPHER INK have resumed their mysterious existence in the ether of writing and not writing. Rumors of a rift, rumors of reconciliation. Rumors of a musical based on their classic play “Murder in the Men’s Store,” rumors of long term genetic disintegration. No matter what the truth BROKEN GOPHER INK marches on often getting lost.”