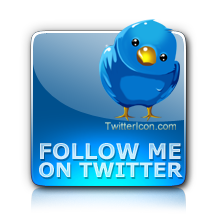 You know the story.  Author meets agent.  Author stalks agent.  Agent realizes that Author is everything that Agent ever wanted, and stardust falls from the sky as contracts are signed.

Well, this story isn’t really like that.  It’s even better.

Twitter took me a while to get used to, I’ll tell you that.  It’s like having a conversation with 700 of your closest ADD friends.  At the same time.  But once I got the hang of it, I was hooked.  I use Twitter as a reward (“Yay! I finished my project and now I can play! What’s up, Twitter?”), a resource (“Does anybody here live in New Haven, CT? What’s your weather like RIGHT NOW?”), and as a place to meet new writers.  I follow those in the publishing industry. I follow agents. I follow established writers and those who are in the same boat I’m in.  It’s a blast.

One day, after my work was done, (and that’s the key, right there.  Don’t let Twitter distract you from your priorities) I was having a Twitter conversation.  Meanwhile, snippets of other conversations were popping up, and somebody tweeted a link to a Query Tracker contest.  And I?  I pounced.

Query Tracker was announcing that agent Jason Yarn from Paradigm was going to judge a query contest.   But not just any contest!  You had to sell your entire novel in a one line pitch and your first paragraph.  A one line pitch? Are you kidding me?!  Condensing an entire novel into a query letter was hard enough, but this? This was a challenge!

The contest was limited to 100 people, so time was definitely a factor.  It filled up very quickly.  If I hadn’t seen the link right then and jumped on it immediately, then I would have lost my opportunity.  Although I didn’t win the contest, Jason was intrigued enough that he asked me to send my query and first ten pages.  Then my full.  Then The Call, which turned out not to be The Call, but A Call.  Then The Real Call.  And the rest is history.  Or at least, it will be.

I’d like to think that, barring this opportunity, I would have eventually sent Jason my query and he would have shouted, “Hallelujah, this is the query of my dreams!”  It could happen.  But I’m also realistic enough to know that timing really is essential.  By the time I finally carefully researched him (hello, Jason Yarn is way back in the “Y” section) and sent my query in, would he still be looking for this type of manuscript?  Would he enjoy the whimsy, or would I perhaps catch him on a bad day and get a rejection?  Luckily it’s a scenario that I don’t have to think about.  I had an eye on Twitter and it helped me land a fantastic agent.  There really isn’t a stronger argument for social media than this.

5 Comments on “How I Got My Agent: A Social Media Love Story”