So we were all hanging out in the secret Geeky Writer bunker (which is not to be confused with the Free Hugs bunker—that’s down the street from Love Train Station) when we realized it’s been three months since our V-Day broadcast! With that in mind, The Geeky Writer Gang™ has a special hangout in store for you.
See, our very own Eryk Pruitt has a new novel coming out on May 26th. It’s called HASHTAG, and it promises to be just as dark and twisted as his debut. Since Eryk’s a pretty cool guy, we all thought we should host a special broadcast to kick off his new book, and to engage in the usual nightly shenanigans you’ve all come to know and love.
Join us on Tuesday, May 26th at 8 PM as we go live on YouTube to congratulate Eryk, talk about his latest release, and discuss whatever else comes to mind. Maybe we’ll finally find out who’s tied up in his basement!
There may even be giveaways, and you know what that means, folks: if you want a chance to win, you have to show up and PARTICIPATE! As with previous events, links to the broadcast will be posted here on the event page a few minutes before we go live. You can tune into YouTube to catch our antics and ask any questions you might have right here on the event page.
We hope you’ll consider joining us!
###
Who are the Geeky Writers?
Eryk Pruitt is a screenwriter, author, and filmmaker living in Durham, NC with his wife, Lana, and his cat, Busey. He wrote the screenplay for the award-winning short film FOODIE, and his first novel, DIRTBAGS, was released earlier this year from Immortal Ink Publishing.
Anthony Rapino resides in Northern PA and is the author of the novel SOUNDTRACK TO THE END OF THE WORLD, the short story collection WELCOME TO MOON HILL, and most recently the audio book REALITY ENGINEERS, produced and published by In Ear Entertainment.
Mercedes Murdock Yardley, aka Mrs. Stabby, is the author of NAMELESS, the first book in The Bone Angel trilogy, the short story collection BEAUTIFUL SORROWS, and the most recent novel, PRETTY LITTLE DEAD GIRLS.
Todd Keisling is the author of A LIFE TRANSPARENT, THE LIMINAL MAN (a 2013 Indie Book Award Finalist), and the bestselling UGLY LITTLE THINGS series, all published by Precipice Books. He lives and works with his wife and son somewhere in Pennsylvania. He’s awkward and weird, and if you were to live next door to him, your grass would probably die. 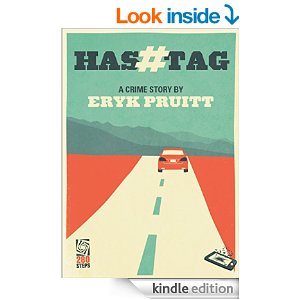 Join us tonight at 5 PM Pacific as we celebrate the release of Eryk Pruitt’s HASHTAG.   Write in here and ask questions that we’ll answer live via Youtube.