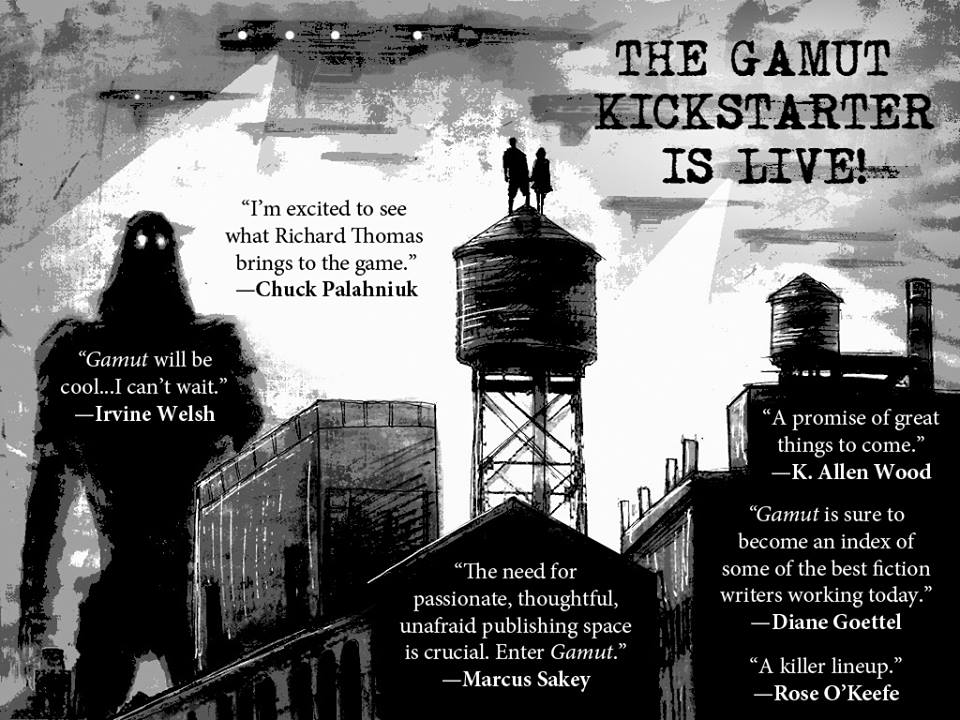 from neo-noir and transgressive authors worldwide

“I’m excited to see what Richard Thomas brings to the game. Gamut will
be the new magazine not written for the little old lady in Dubuque.”
—Chuck Palahniuk, author of Fight Club

American neo-noir author Richard Thomas has launched a Kickstarter project on February 1st, 2016, to fund the launch of Gamut, an online magazine of neo-noir, speculative and literary fiction. The Kickstarter closes on March 1st, 2016.

To be successful, the Kickstarter will need to raise $52,000, which works out to about 1,700 annual subscribers paying $30 per year for access to the magazine. Gamut will focus on publishing genre-bending, hybrid fiction that utilizes the best of genre and literary voices. If successful, the magazine will launch online January 1st, 2017.

“Gamut will be cool, and it will be out there, right on the edges of fiction. I can’t wait.”
—Irvine Welsh, author of Trainspotting

Speaking of his plans for Gamut, Thomas said: “I want to support the voices that aren’t getting enough recognition, I want to pay a great rate (twice the going professional rate)and I want to surround myself with talented authors and artists that inspire me.”
“We need more markets like this,” he continued, “publishing edgy fiction that straddles the fence between genre and literary fiction. I think we’re in a golden age of dark fiction and there is a real demand for it.”

Over the past eight years Thomas has written and published over 100 short stories, in magazines such as PANK and Cemetery Dance; three novels—including Disintegration and Breaker at Random House Alibi; and three short story collections.

“The heavyweight talent behind Gamut is a promise of great things to come.”
—K. Allen Wood, Publisher, Shock Totem Publications

“Gamut will include mostly original fiction and fiction reprints, but also columns, non-fiction, art, flash fiction, poetry and maybe even a serial memoir or novella,” said Thomas, expanding on what subscribers could expect.
“To begin with, I’ll be publishing solicited material but I open up Gamut to submissions later in 2016. When that happens, I’ll consider fantasy, science fiction, horror, neo-noir, crime, mystery, thrillers, magical realism, transgressive fiction, Southern gothic, literary fiction and poetry —I want to read anything done with innovation, heart and emotion.”

“I beg to differ with Mr. Palahniuk: There’s a fabulous indie bookstore in Dubuque, and
little old ladies have been known to write some astonishing speculative fiction. Some
of it might even end up in this magazine, which promises to bring together the fresh
and the dark and the extraordinary. Look for great, weird things from [Gamut].”
—Rebecca Makkai, author of The Hundred-Year House

“Everything I enjoy reading and writing,” he continued, “typically leans toward the dark side, but I have been known to embrace lighter work, and humor, now and then. It just has to move me. And I like to be surprised. Also, diversity is important to me—so whatever your sex, race, orientation, religion, country of origin, current location—send me work, I want to read it.”

Contributing artists include Luke Spooner, George C. Cotronis, Daniele Serra and Bob Crum, as well as photographer Jennifer Moore.
Fiction editors at Gamut will be Dino Parenti, Mercedes M. Yardley and Casey Frechette, poetry editors will be Heather Foster and Whittney Jones, with Keith Rawson, Max Booth, and RK Arceneaux acting as regular columnists, in addition to freelance essayists covering everything from film and books to travel and food.

“Sure to become an index of some of the best fiction writers working today.”
—Diane Goettel, Executive Editor, Black Lawrence Press

If Gamut reaches its $52,000 goal, stretch goals include a scholarship at the $53,000 mark to help low-res MFA students and other authors, publication of a memoir showcasing one woman’s fifteen-year experience as a professional exotic dancer, Stripped: A Memoir, at $56,500, and a print anthology of the best of Gamut’s first year of fiction at $83,660.

NOTE TO EDITORS
For more information about Gamut or interviews with Richard Thomas please contact richardgamut@gmail.com. For images, click over to our Dropbox folder.
About Richard Thomas
Richard Thomas is the award-winning author of seven books—Disintegration and Breaker (Random House Alibi), and Transubstantiate (Otherworld Publications); three short story collections, Staring Into the Abyss (Kraken Press), Herniated Roots (Snubnose Press), and Tribulations (TBA); as well as one novella in The Soul Standard (Dzanc Books). With over 100 stories published, his credits include Cemetery Dance, PANK, storySouth, Gargoyle, Weird Fiction Review, Midwestern Gothic, Arcadia, Qualia Nous, Chiral Mad 2 & 3, and Shivers VI. He has won contests at ChiZine and One Buck Horror, and has received five Pushcart Prize nominations to date. He is also the editor of four anthologies: The New Black and Exigencies (Dark House Press), The Lineup: 20 Provocative Women Writers (Black Lawrence Press) and the Bram Stoker-nominated Burnt Tongues (Medallion Press) with Chuck Palahniuk and Dennis Widmyer. In his spare time he is a columnist at LitReactor and Editor-in-Chief at Dark House Press. His agent is Paula Munier at Talcott Notch.
Praise for Richard Thomas
EDITING
The New Black: “…the new high standard for dark fiction anthologies. It’s loaded with intelligence and talent. Every one of the pieces in this extraordinary compilation is worthy of your full attention.”—Jack Ketchum, The Girl Next Door / Burnt Tongues: “…dark, subversive and disquieting fiction for readers ready to go all the way down.”—Booklist “Anyone looking for boundary-breaking tales that also pack a haunting, powerful punch will find hours of entertainment here.”—Kirkus Reviews / The Lineup: 20 Provocative Women Writers: “These are stories that live on the edge of the cliff. They’re wild and unpredictable and important and wonderfully unsettling. Somewhere in this volume, you’ll find your new favorite voice.”—Rebecca Makkai, The Hundred-Year House
WRITING
Breaker: “…a modern noir fever dream: brutal, lyrical, evocative. But it also exhibits surprising tenderness—its shattered characters find strength in one another, and beauty in the pattern of the cracks.”—Chris F. Holm, The Killing Kind / Disintegration: “A dark existential thriller of unexpected twists, featuring a drowning man determined to pull the rest of the world under with him, Disintegration is a stunning and vital piece of work.”—Irvine Welsh, Trainspotting “Sweet hot hell, Richard Thomas writes like a man possessed, a man on fire, a guy with a gun to his head. It’s a twisted masterpiece.”—Chuck Wendig, Blackbirds / Staring Into the Abyss: “an outstanding book, a grim tapestry of broken lives and shattered dreams, of dark fantasies and dark reflections…gets my highest recommendation. “—Kealan Patrick Burke, The Turtle Boy “The stories in [here] are little literary predators…smart, savage, and stealthy, with a lethal pounce at the end. Readers who enjoy finely-crafted and genuinely disturbing dark fiction will love Richard Thomas’s outstanding collection.”—Lisa Morton, Monsters in L.A.