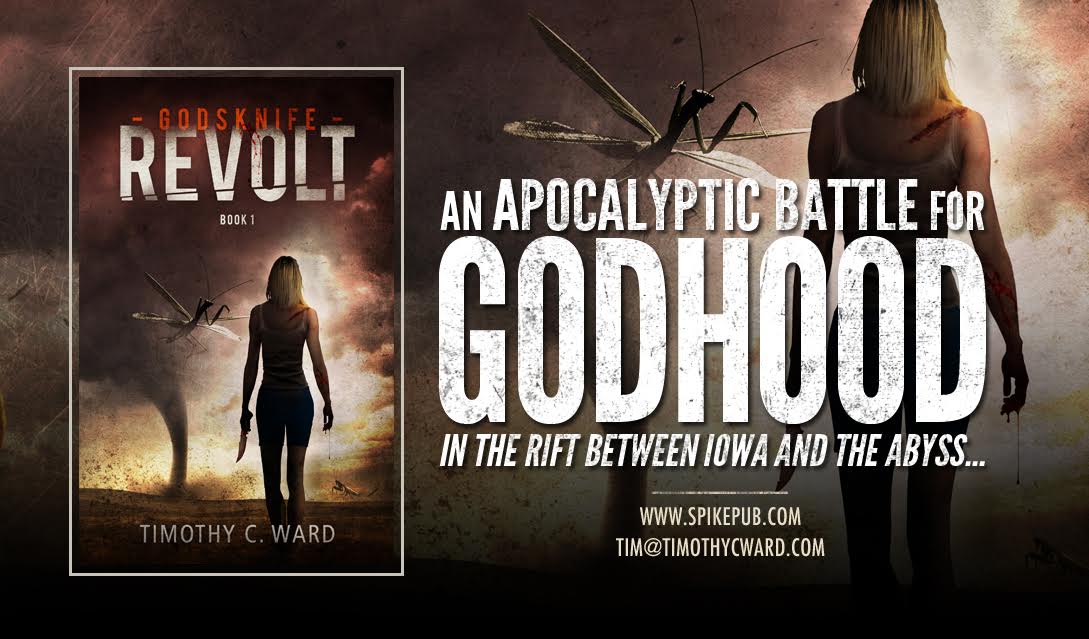 My friend Tim Ward has a cool new book titled Godsknife: Revolt, and it looks AWESOME. I’ve known him for a few years, and he is seriously the coolest guy. We just hit it off beautifully, and I admire the goodness and talent that I see in him. I’m happy to host an interview with him.
Tim! It’s been such a long time since we’ve had a chance to chat. I’m so glad you made time to stop by my blog. Will you tell us what you’ve been up to?
It has! As everyone who follows you online…and in person…that got weird—anyway, Mercedes is one of my favorites, as a writer, a friend, and what I see of her as a wife and mother.
I  know you have a new book that just released. Can you tell us about it? Where can we find it?
Yes, Godsknife: Revolt is releasing this month from Evolved Publishing, a small publisher that I’ve followed since our mutual friend Axel How published his debut novel, Hot Sinatra with them. I’ve been drawn to their quality editing and how easy their stories are to get into. It is amazing to think that these four or five years later I’ll have my own coming out.
I’ve been following you, too, miss overachieving pants. You’re one of the best “urban fantasy” writers out there, and as I think about it, I can see how Apocalyptic Montessa and Nuclear Lulu and Nameless inspired what became Godsknife: Revolt.
First, in Apocalyptic Montessa—and I bet you remember—there was a point where I stopped reading because the character was so unlikable. I am certainly glad I picked it back up because that ending was incredible, and I was truly wrong about that character. I have to be careful how much I saw about Revolt, but in the process of writing one of their arcs, I hit a bottom that may cause some to get angry.
Godsknife: Revolt is more like Nameless in that it is my creative journey into how people in a world like ours would fight a supernatural trinity of warring powers and members. In mine, the three are differentiated by their pursuit of Chaos, Order or the Maker. It is kind of like the adventure of The Gunslinger if written by C.S. Lewis, but with none of our religions so I can explore the various belief systems that people exhibit and pursue even if they wouldn’t call them systems or belief. It’s less about pointing at one belief system as better than another and more about how characters use what they believe, what they’re afraid of believing and how they’ll turn out if they change what they believe—for good and bad.
And it’s about me getting to play with seven foot tall praying mantises and swarms of infectious cicadas turning central Iowa into a breeding ground for a new god’s army. Whereas your characters in Nameless got to play in the spiritual realm, mine get to travel through the Void to find the Godsknife and kill or be killed by the god of the Abyss.

That is the coolest thing to say. Thank you. How about a short excerpt?
He leapt before the stone lost stability, orden-stabbed his finger into her noose-loop, and yanked her into the air. He flicked her around and palm-punched her chest. Orden extended his attack into her ribs without his need for touch. The blow was weakened by his guilt, but not enough to fail.
She hit the ground and bounced.
He landed with his knee beside her. She rose from the waist, and he pressed orden into her chest. Heated vibrations shook his hand as the ground melted under her, parting the molecules enough to swallow her three inches deep.
She threw a punch at his jaw.
He dodged it and let go.
She cried out as the ground pinched all around her, holding her in place.
He carved his mark—a cursive C—on the stone and stood.
The idea for his mark came from his brother, Carl, forming his first initial like an orden-worm scar—Order for Carl—because it was about more than one atom refusing to accept charity. He did this to find his brother, and make the world right for them both.
She wiggled until she knew he’d won, then relaxed, staring up at Anthon with her best plea. “Please, I can show you the third.”
“I’m not interested in a god who left us to clean up after its mistakes.”
“He hasn’t left.”
“Ev, listen, we aren’t having this discussion. I’m telling you what your two options are: Josai’s, or death by Mercer’s hand. I know which one Jeremy—”
A soft footstep echoed down an unseen, but terribly close, hallway.
I knew it.
“If Jeremy wants out,” he whispered, “I’ll send him to Josai.” He eased the ground under her, orden-grabbed her loop, and lifted her to her feet. “Now go before you banish us both.”
He physically pushed her out of the mountain’s edge, and solidified the crevice into black shale, as she turned to watch the wall form between their worlds.
As it closed him off into darkness, he couldn’t help thinking she may have found the better side. Even if he’d go kicking into the grave for Order, that didn’t mean he wasn’t afraid, or lost.
Anthon turned and walked toward his sculpture gallery. His orden needed training. If Shila decided to reward his newest recruitment with more responsibility, he wanted to be strong and ready.
He felt anything but.

You’ve had a kiddo since we last talked, and I know you were exceptionally busy before! How are things for you now? How do you manage to work, be a father, and write a new book?
In case you didn’t see my WorldCon unboxing (I’ll have a table in the dealer’s room if anyone is going), my kiddo has another kiddo to look forward to this January…so, yeah, my busyness has no idea what’s in store. I’ve had to adapt since my first born, Kai became old enough to want to play. Since then it has been an ever battle between giving him time, asking for my wife to take him out for periods on the weekends, and just forcing myself to work when the time’s there. I’m good though. My wife is amazing and we’re having so much fun laughing with our 2 ½ year old playing at the park, with cars and singing silly songs. Somehow I still write books every nine months. It just happens.
I’m interested in your writing schedule. Are you an outliner or a free spirit? What does a typical writing day look like for you?
I write after work, from 3:45 to 4:30 or later, then if I don’t get enough done, I have to write when Kai goes to bed around 7:30. I despise writing at night because I wake up so early, but I have to keep in shape too, so mornings are my workout time.
I am a free spirit. I am glad to have experienced writing the end of my two book Sand Divers series—which finished this summer with the release of Scavenger: A.I. I really had no idea how I was going to wrap everything up in just a two book series, but I got to a point where it fit perfectly. I have no idea how to explain it, so I just write about characters with problems, watch them try and work them out—which no doubt includes lots of failures—and then get them to a point where they have to make life changing decisions and see what they do. As long as I stick to that formula, I don’t care to know what the plot will be. It will happen as I go.
You had to shift a few things around in order to accomplish your goals. What are some things you let go? What are some things you added to your life?
As you know, I gave up my role as executive producer of Adventures in Scifi Publishing’s website and podcast about two years ago. Listen to Mercedes on this episode of Grimdark Characters. Podcasting is kind of like blogging, it’s fun and then it’s work and since it doesn’t pay, it probably isn’t going to last long. Ultimately, I saw my full day or more a week podcasting as time either away from writing or away from family. I want to be known as a husband, a father, and a writer, and podcasting didn’t fit into those obligations. Writing is so hard. We’re in this weird market where the people that make it are either crazy productive, were releasing quality books during the beginning of the Kindle era, or have found a way to treat writing books like a marathon. I’m in the third category, and I’m in a daily struggle to accept that. I have added the peace of putting the work down as soon as my wife and son get home, and being there for two or more hours a day. It’s awesome.
Tell us how we can find you online and where we can purchase your work. Thank you so much! Best of luck to you, my dear friend.
This was kind of a long blog, wasn’t it? Did anyone make it this far? If so, you can find me at www.timothycward.com and my list of books at www.spikepub.com –fun fact, I didn’t have a name when I was born so my grandpa called me Spike for like two weeks until I became Timothy Charles.
Thanks, Mercedes!