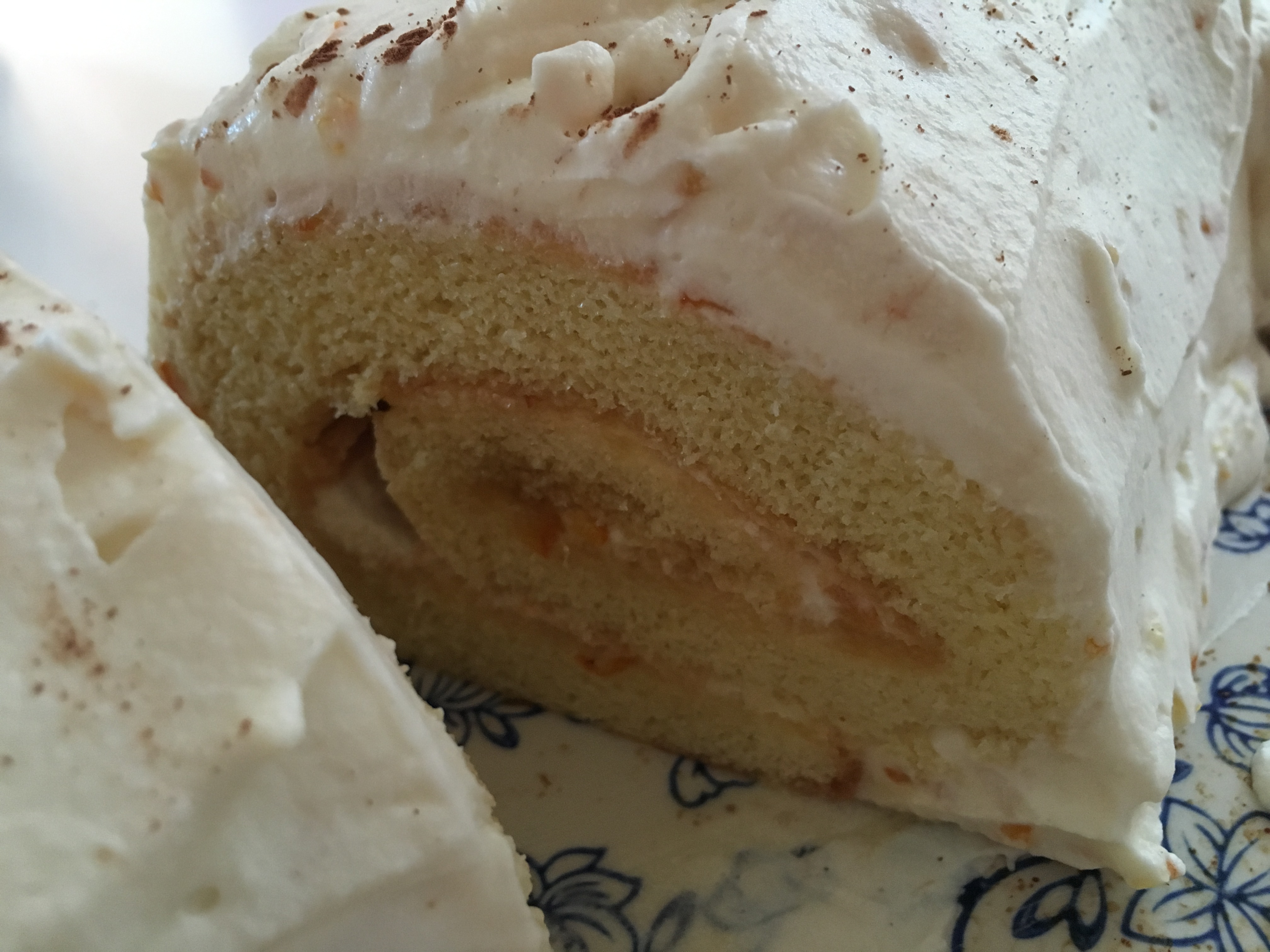 Boys and Girls, today I am going to impart the wisdom that Sister Kaameriinaan taught me in Finland! (Yes, I’m nostalgic for Finland. We lived there briefly ten years ago.) She invited Niko and I over for a day of baking and drinking Pepsi Light in order to keep us out of Luke’s hair while he studied for his finals.
STEP ONE:  Preheat the oven to 350 degrees. Take three identical drinking glasses and fill the first one with six eggs. Next, fill the second glass with flour, up to the same level as the eggs. And fill the third glass with sugar, also to the same level as the eggs and flour. Got that? Three equal parts eggs, flour, and sugar. 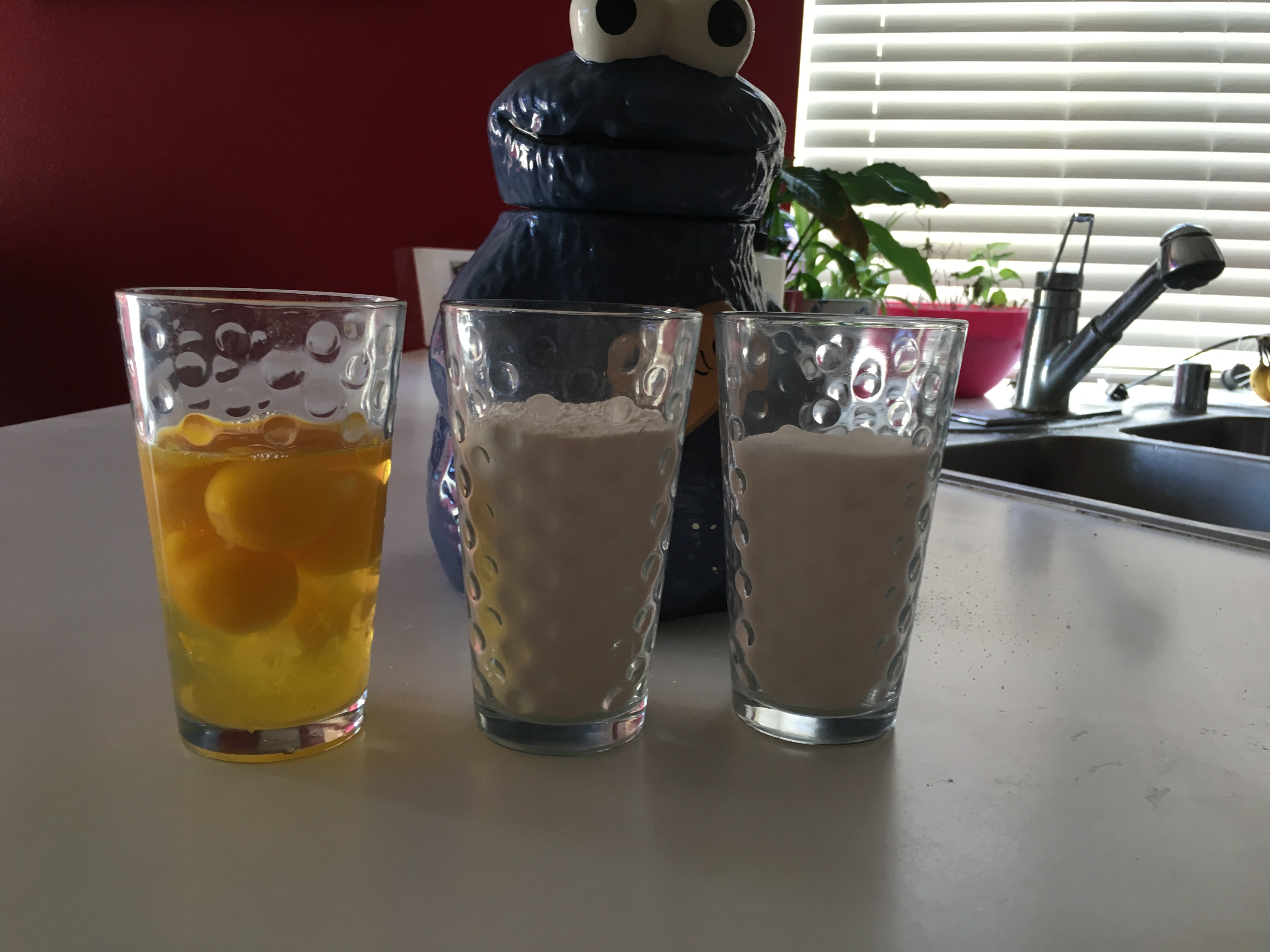 STEP TWO: Now toss one teaspoon of baking powder in with the flour, and mix the eggs, flour, sugar, and baking powder in a bowl. If you’re really doing this the Finnish way, you’d use your hands instead of a spoon, but whatever floats your boat.
STEP THREE: Line a cookie sheet with parchment paper. That is VERY important, otherwise this whole experiment is all for naught! Then pour the batter onto the baking sheet. Use a spatula and spread it so that it fills the entire sheet. Yeah, I didn’t do that, and paid dearly, so heed my words, O children. Bake it for anywhere from 7 to 20 minutes, peeking in on it to make sure it doesn’t burn. It’ll cook quickly, because it’s so thin. 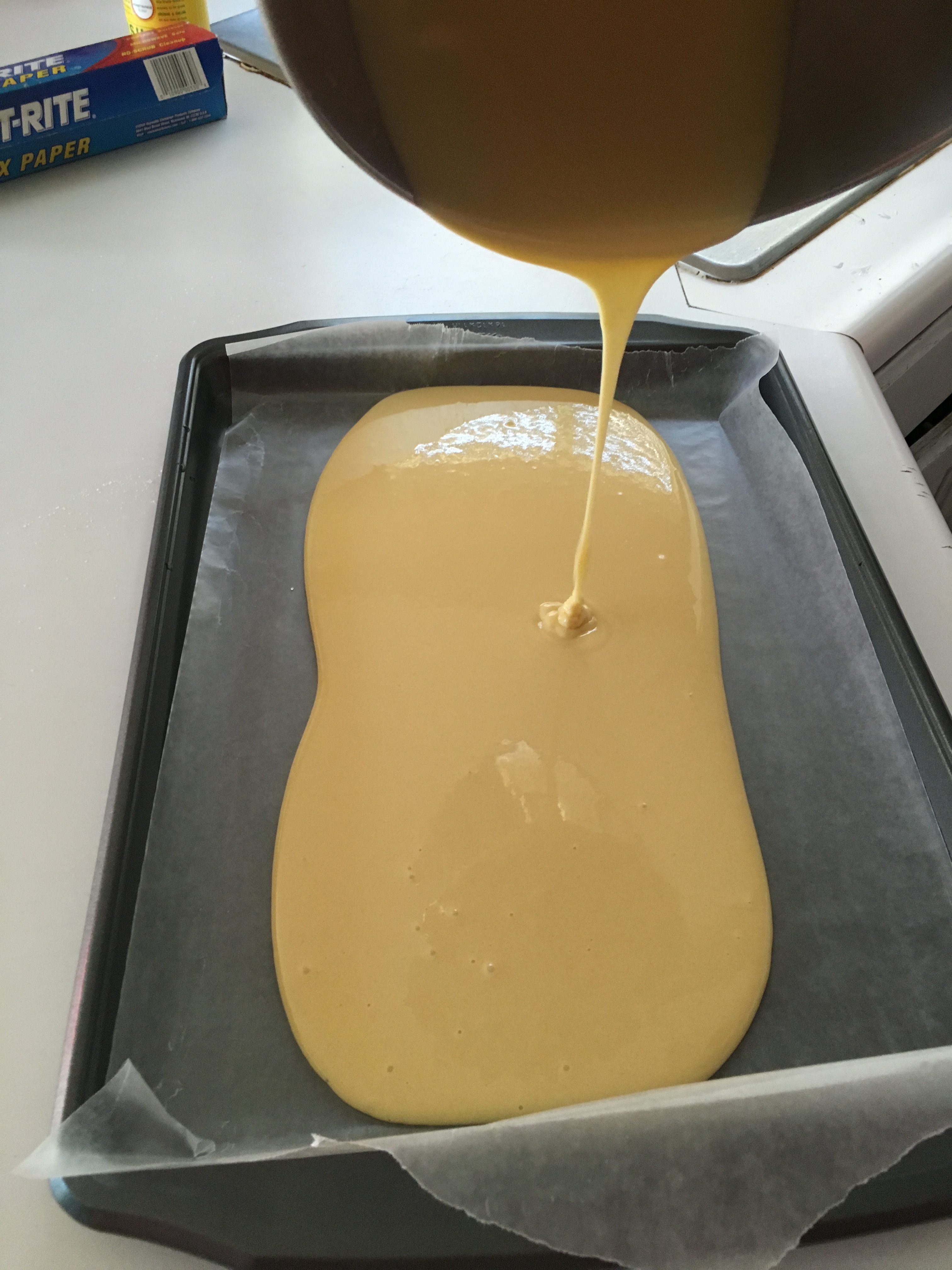 STEP FOUR: (Also Picture 2) Hooray, it’s cooked! Pull it out, let it cool for a bit, and then slather the entire top of the cake with something sweet. What, you ask? Who knows?! Hence the adventure! I used orange marmalade, because I’m nuts about the stuff, but you can use any type of jam, or chocolate syrup, whipped cream or crushed nuts…you get the picture. Knock yourself out! 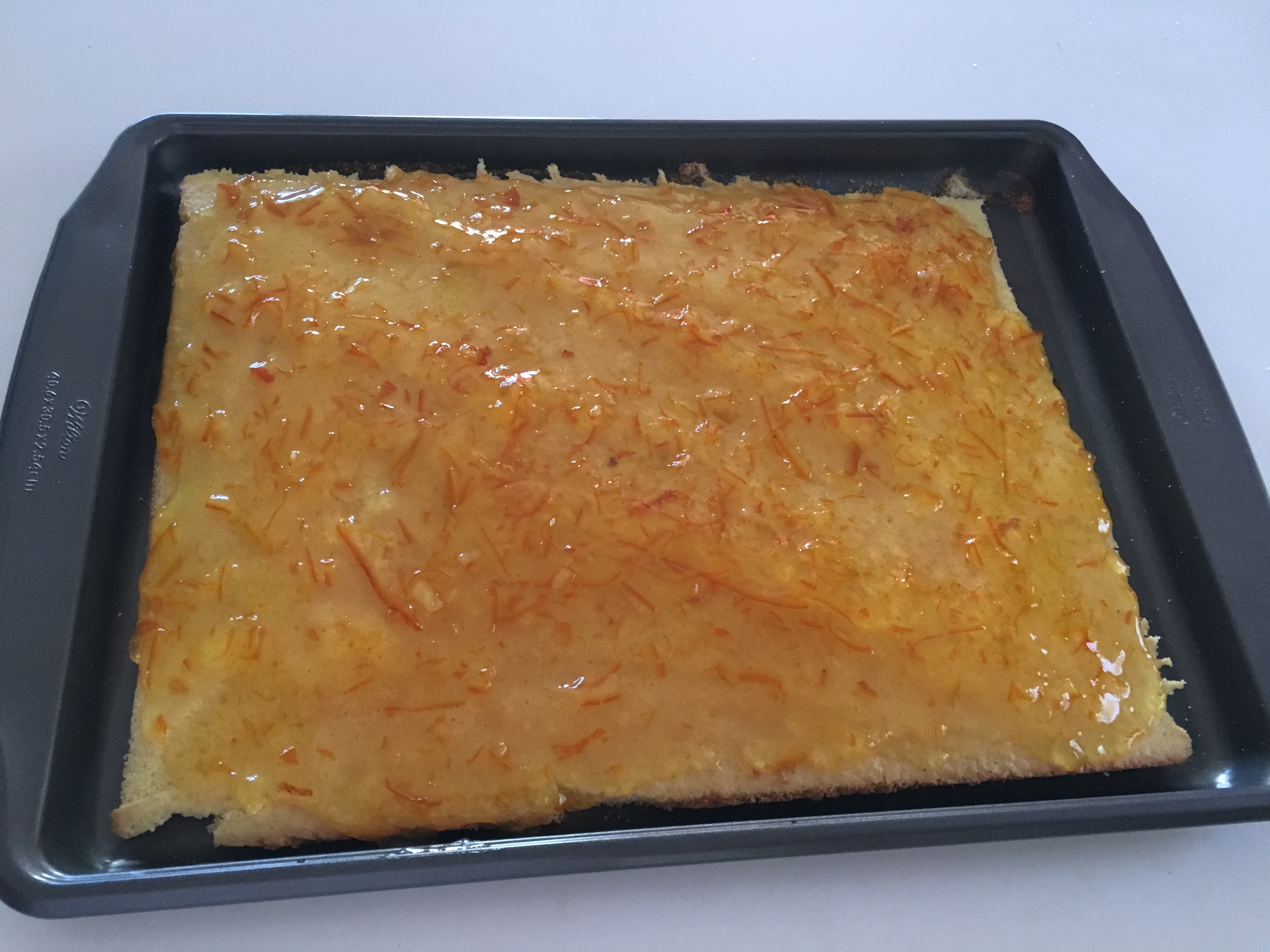 STEP FIVE:  Carefully (carefully carefully!) peel the cake off of the paper as you go, and roll it up into a tube. Make sure it’s cool enough that the cake doesn’t just fall apart, but not so cool that it becomes a permanent part of the parchment paper.
STEP SIX: Decorate! This is the fun part! I used whipped cream as frosting, but you can use real frosting, or anything else that you want! Frost it, don’t frost it, use sprinkles or again, chocolate syrup or edible flowers…after the whipped cream, I grate some chocolate on top or sprinkle on some cocoa powder. 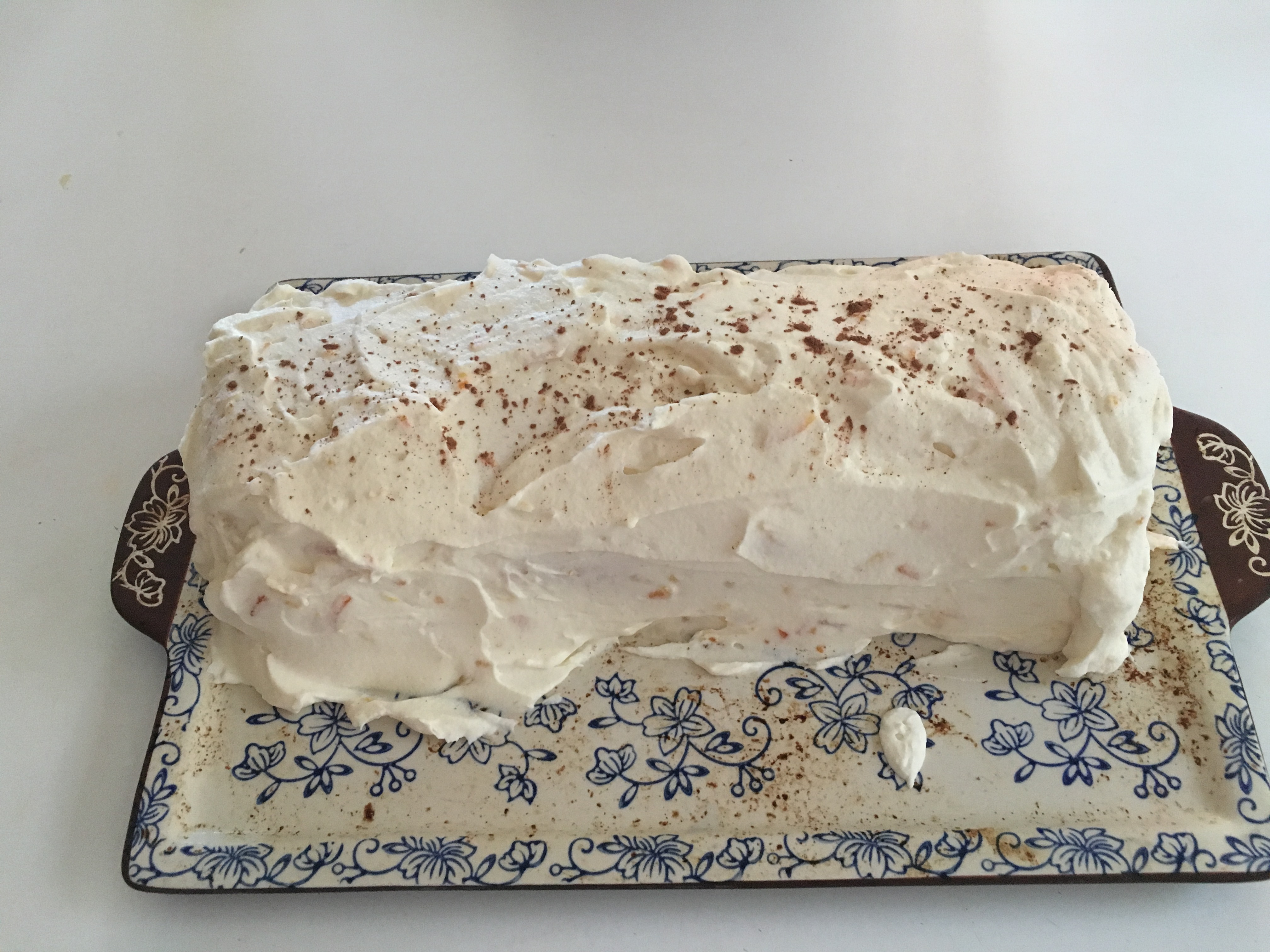 This cake is totally a freezer cake, so you can toss it in there and forget about it until you’re ready to wow company. Or the spouse. Or the UPS man, bless his brown-shorts-covered soul. It’s also pretty when you slice it, and that’s very important. Because pretty things make the world go round.