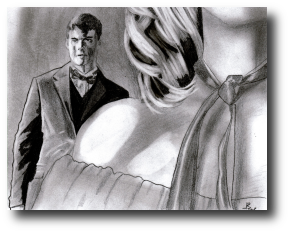 Hey all!  Today I participated in my very first blogfest, and it’s fun! I’m enjoying reading the other entries, so thanks to Christina for hosting!

I took the characters from my very first novel and threw them into a rainy day.  It was fun to visit them again.   Yes, this is the same Ray (now an adult) from my short story Ray the Vampire.  Have a great day, everybody!

The rain fell ceaselessly.  It was dark.  Torrential. Brooding.  The rain was angry tonight and taking its vengeance out on the town, Soleil could feel it.  The cemetery would be flooding and the bodies would rise above the soil.  Soleil couldn’t stand to face the dead again.

The door opened so abruptly that it crashed into the wall.

Ray stood in the doorway, water rushing down his white face.  His fangs gleamed in the stormlight.

He saw that Soleil hadn’t moved from the window seat and he cocked one eyebrow.

“Are you moping again?  Thinking about love lost and all of that?  What could have been if only your darling one wasn’t a psychotic freak of nature?”

Soleil sighed and wrapped her arms around her knees.  “Don’t be harsh, Ray.  Orion just had a lot going on. He lost sight of…”

“What?  Humanity?  How not to suck?  Whatever, love.  You’re just doing the ‘wah-wah, poor me’ thing.”  He bounded to her, dragged her to her feet.  “We have places to go, things to do.  Let’s pretend we’re kids again and get lost out in the orchard.  Or go swimming in the hole.”

“In the rain.”  He looked serious for a second.  “Enough of this.  He’s already taken too much from you.  It’s time to live, girlie.”  He grinned again, the same old Ray that he had always been, and Soleil smiled back.

“Is this where I point out that you’re undead?” she asked.

She thought.  “How about a picnic?”

11 Comments on “The Rainy Day Blogfest”