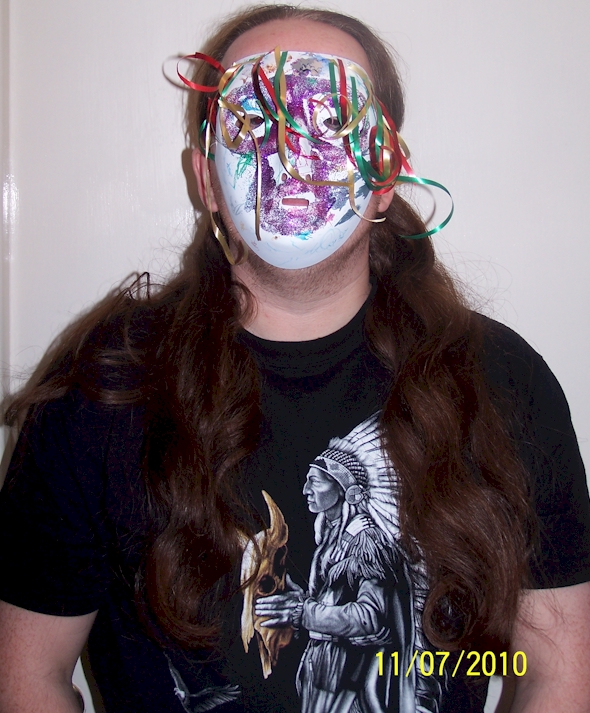 Jay Faulkner would like to tell you a couple things about himself.  The
first is that the mask in the picture was made by his awesome, 3 year old
son, Mackenzie and it is definitely, most assuredly, the best mask in the
whole wide world.  If anyone wants to argue that fact please refer to the
seventh paragraph and the amount of black belts he holds.  The second is
that while he really doesn’t like talking … erm, typing … about himself in
the third person it is a very hard habit to break and, so, he is going to
keep doing it.

Jay resides in Northern Ireland though says home is simply wherever his
loved ones are – his wife, best-friend and soul mate, Carole, and their
two wonderful baby boys – Mackenzie and Nathaniel.

He says that while he’s a writer, martial artist, sketcher, and dreamer
he’s mostly just a husband and father.

Seriously, Jay honestly and truly believes that there is nothing more
important than his family; he just wishes his family thought the same way
but, recently, he has found out about something Carole (he wonderful and
beautiful wife) calls the pecking order.  It is based on the relative
importance of the people in the family, in order of meeting their needs.
It goes like this:

Jay is not sure how much of this is a joke, but he has started to keep a
close eye on proceedings just in case.

Anyway, as it says up there, in the third paragraph, Jay has a
schizophrenic outlook on just what he ‘is’.  Educationally he is an artist
(at least that is what his degree says), professionally he is an IT and
Information Security professional, his passion is martial arts which he
has been practising for over twenty years and holds multiple black belts,
and his dream is to be a professional writer (for now he just does it
unprofessionally 😉 ) but, like he said, the bottom line for him will
always be that he is a family man.

… but you are here to find out about Jay, the writer.  Ok:

He has two short stories – ‘Blind Faith’ and ‘Bloom’ in Pill Hill Press’s
anthology, ‘Daily Flash 2011’; ‘Mary’ in the ‘Caught by Darkness’
anthology; ‘Eyes Wide Open’ in the ‘Dusted’ anthology; and a novella
entitled ‘The Crimson Blade’ published in Static Movement’s ‘By Mind or
Metal’ anthology coming out in 2010.

He is currently working on his first novel, ‘Wednesday’s Child’, and even
though that isn’t finished a sequel (of sorts) is already percolating in
his head – then again many tings percolate in there, so who knows what
will happen?

Jay doesn’t, that’s for sure.

Jay founded, and edits, ‘With Painted Words’ – www.withpaintedwords.com -a
monthly, online literary magazine that takes inspiration from monthly
image prompts; it is thanks to that site that he got to know the great
writer and all-round great person, Mercedes**

If you want to know more about Jay, then you can visit here:
www.jayfaulkner.com

*When the puppy was first seen Jay was given an ultimatum, there and then:
puppy or third child.  Easy decision, really.

8 Comments on ““Be Mysterious: Writers in Masks” Features Jay Faulkner”