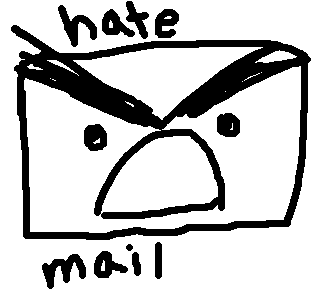 “Your First Hate Mail: How Life Can Change After Working For a Magazine” has gone live at The Fictorian Era.  Go! Read it! Support them! But first, let me tell you about our little literary meet-cute.

So I was at World Fantasy Con in October.  Besides geeking out over some of my favorite authors, I was also scouring the joint for Sean Markey.  Now I have never met Sean, but we’ve tweeted back and forth and I was hoping to track him and his wife down for some conversation.  Mercedes was on the hunt.  On the prowl.  Beware.

Apparently I’m a super sucky prowler.  I never did find Sean (I’ll get you next time, Gadget!) but I did run into Matthew Jones.  I actually turned around, eyed him, compared him with the tiny little Twitter avatar in my mind and said, “Your name doesn’t happen to be Sean, does it?”

Matt is charming, adorable, and fierce. But he also has a heart of gold and, thankfully, a wallet, which is what I needed because I was ONE DOLLAR SHORT of buying a signed copy of Peter S. Beagle’s The Last Unicorn graphic novel, which was sold out not only at WFC, but at every comic book store in the county.  I know this, because my Illiterati sister billie the girl called all of the comic stores for me.  (This is yet another reason why my writing group rocks.)

So Matt gave me a dollar.  I gave him a hug or promised him my soul or some such thing, and Bill and Peggy Wu from William Wu Books gave me their copy of The Last Unicorn.  I was feeling the love.  And that is the story of how I began stalking Peter S. Beagle, Matt, Bill and Peggy, but no longer Sean Markey.

Er, I mean, that’s the story of how this guest post came to be.