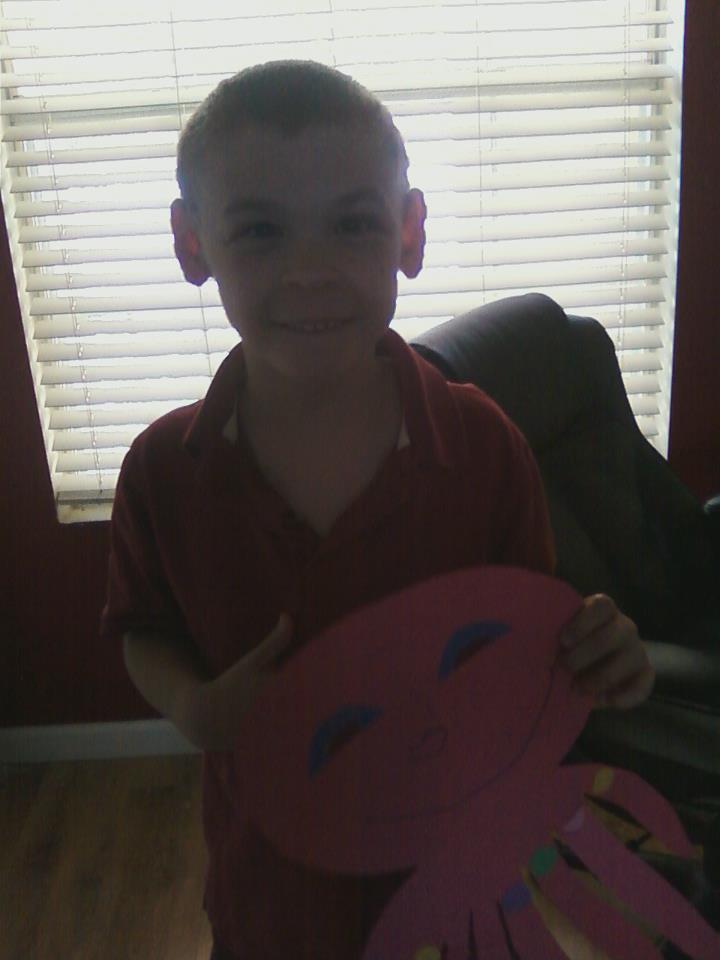 I’ll tell you straight up that he wasn’t missing for long, about 20 minutes, and he was returned safely.  But I died a little during those 20 minutes.  I didn’t know a heart could stop beating for that long and still let somebody survive, because I felt like it didn’t beat again until he was found.

He’s a runner.  When we bought our house in Vegas, the main selling point was a beautiful backyard with a six foot high wall that surrounds it completely.  We have three locks on our front door, each one getting more elaborate and placed higher as Niko gets taller and more clever. My parents childproofed their house for my kids.  A door at the top of the stairs, and special locks on every outside door that opens with a key.  The key is hidden over the door frame.  I am touched by every precaution. We’re spending a week with my parents now.

But sometimes we slip up, and yesterday Niko escaped and took off when our backs were turned.  There was absolute horror when I realized that the door was open.  It was about 9:30 at night, and dark.  We live half a block from a main road. Nobody would be able to see Niko in his dark pajamas, and he wouldn’t realize that he would need to dodge the cars.

We spread out.  I stayed at the house because the girls were asleep and I wasn’t going to leave them alone.  My parents started knocking on doors and checking the roads.  Every terrible scenario came to my mind.  I am all too keenly aware of how precious life is, and how brief it can be.  I’ve never taken it for granted.  Do you know what horror is?  We talk about it all of the time.  I read it, write it, and last night I was living it.  A missing child is true horror.

Somebody rang the doorbell. I run outside and there’s my friend Shawn, a guy that I met 20 years ago in junior high.  I haven’t seen him for a decade, but he’s standing on the porch saying, “I have your son.”

I have your son.  The sweetest words somebody could say to a frantic mother.  I feel my heart beating again, but it’s too fast, so fast that it’s making me dizzy.  I shout to my parents that we have him, and to stay with the girls, and then we’re running to Shawn’s house.  He had moved in around the corner, and his house was on the way to the elementary school, where the kids and I had played earlier that day.  I’m sure that’s where Niko was going, but he stopped in at Shawn’s house, walked right inside, said something about computer, washers, and dryers, and headed for the laundry room.  A small boy in pajamas and without shoes, who doesn’t speak clearly and walked right past the two big family dogs.  Shawn’s wife was on the phone with the police, knowing that there were frantic parents somewhere.  Shawn said, “Let me see him.  Oh, that’s Niko.  I know him from Facebook.”

I’m on Facebook all of the time.  I talk with my friends, check out other writers.  I look at pictures and I post pictures.  Pictures of writing events, of cool places that we’ve traveled.  Of my kids.  I’m so grateful that I posted pictures of my kids.

I’m much more grateful that an old friend checked them out, and was able to remember them.  As I write this, Niko is flitting around me, humming songs.  He’s carefully checking out my parent’s washer and dryer.  He slept easy last night, falling into bed without realizing that anything was amiss. My parents and I stayed up for hours, walking around the house and trying to wind down.  You just don’t let go of fear.  It doesn’t just leave you.  It has to be worked out of your system like poison or disease.

Niko is clapping his hands and smiling at me.  I’m so grateful for friends who care, and give me the opportunity to smile back.

8 Comments on “How Facebook Helped Me Find My Missing Son”