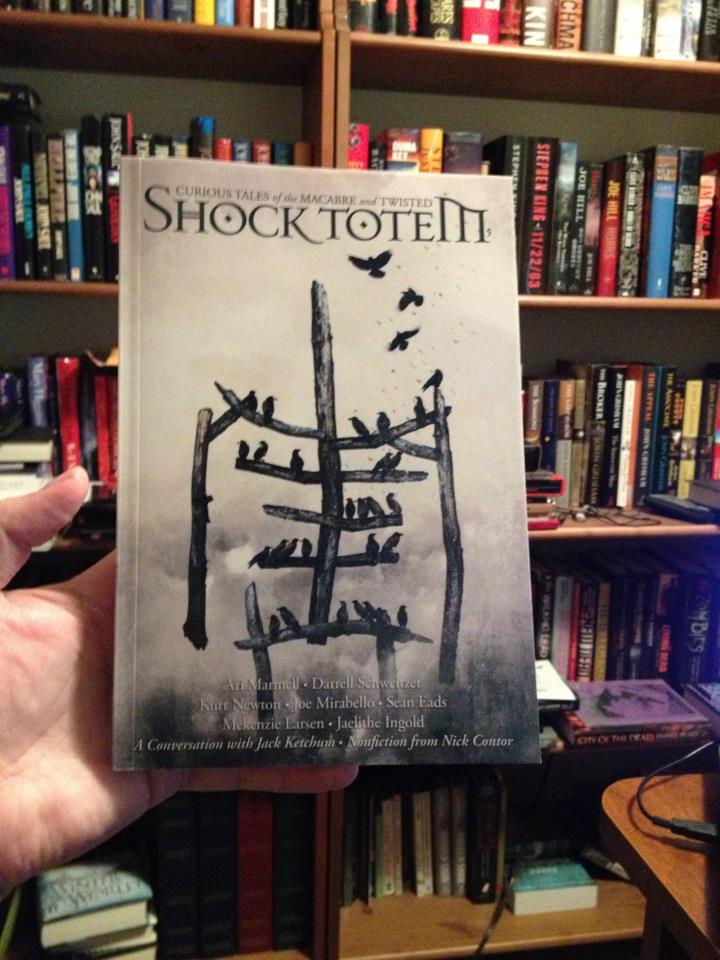 Ken, the editor of Shock Totem and our lovely hand model, shows off the smoky beauty that is Shock Totem Issue #5.  Due to fluctuations in the universe, this issue is rather late, but she has arrived and she’s gorgeous!

This issue of Shock Totem is yet another eclectic mix of horror fiction and nonfiction, featuring previously unpublished stories from the likes of Ari Marmell, Darrell Schweitzer, Joe Mirabello, Mekenzie Larsen, and others. There is also a five-part illustrated microfiction serial, by Kurt Newton, which is something new for us; plus a conversation with horror legend Jack Ketchum, narrative nonfiction by Nick Contor, reviews and more.  I also contributed my first editorial, which was extremely exciting!

The full table of contents is as follows:

* Taking Root: An Editorial, by Mercedes M. Yardley
* In Deepest Silence, by Ari Marmell
* Girl and the Blue Burqa, by D. Thomas Mooers
* Digging in the Dirt: A Conversation with Jack Ketchum, by John Boden
* Hide-and-Seek, by F.J. Bergmann (Poetry)
* Eyes of a Stranger: An Essay, by Nick Contor
* Postmortem, by Kurt Newton
* Jimmy Bunny, by Darrell Schweitzer
* Strange Goods and Other Oddities (Reviews)
* Little Knife Houses, by Jaelithe Ingold (2011 Shock Totem Flash Fiction Contest Winner)
* Canon, by Anaea Lay
* Bloodstains & Blue Suede Shoes, Part 3, by John Boden and Simon Marshall-Jones
* The Catch, by Joe Mirabello
* Three Strikes, by Mekenzie Larsen
* To ‘Bie or Not to ‘Bie, by Sean Eads
* Howling Through the Keyhole (Author Notes)

As of right now, you can order this issue—and past issues, which are all still available—directly from us or through Amazon, in both print ($6.99) and digital ($2.99) formats.

I hope you enjoy!