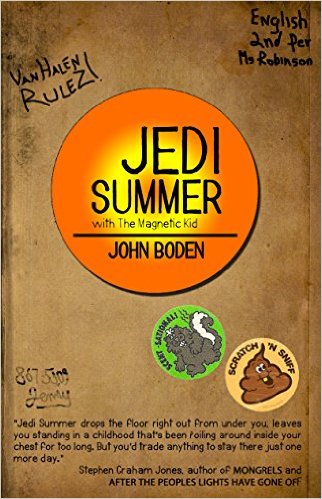 1983: A boy and his little brother wander through a loosely stitched summer. A summer full of sun and surrealism, Lessons of loss and love. Of growing up and figuring it out. Nestled in the mountains of Pennsylvania is a small town, it’s not like the others. Things are strange there- people die but hang around, pets too. Everyone knows your name and sometimes, a thing as simple as a movie coming to the local theatre, is all it takes to keep you going.
If you aren’t familiar with John’s writing, it’s pretty stellar. He has this gritty-yet-dreamy way of telling a story that flips your world upside down. In fact, I had the pleasure of blurbing this story.
“When John Boden tells you a tale, he takes his thumb and smudges the lines between stark realism and dreamy fantasy. I can’t get enough of his work, and I think Jedi Summer might be his deepest piece yet. ”
-Mercedes M. Yardley, author of The Bone Angel trilogy
Pre-orders are available now! I just ordered mine. Jedi Summer with the Magnetic Kid will be released on July 22. Give yourself a literary treat while supporting a very cool and surreal author. You can pre-order your copy here.

John Boden lives a stone’s throw from Three Mile Island with his wonderful wife and  sons. A baker by day, he spends his off time writing or working on Shock Totem. He likes Diet Pepsi and horseradish cheese and  sports ferocious sideburns. While his output as a writer is fairly small, it has a bit of a reputation for being unique. His work has appeared in Shock Totem, Splatterpunk, Blight Digest  and Lamplight  as well as the following anthologies Psychos: Serial Killers, Depraved Madmen and the Criminally Insane, Once Upon An Apocalypse,Robbed Of Sleep Vol 1, and Borderlands 6. His not-really-for-children children’s book, Dominoes is a pretty cool thing or so people say.  You can track him down on the Facebook.