Some of you know that Las Vegas is under seige from the venomous bark scorpion. We’ve had many at my house, which I documented in The Obligatory Scorpion Montage. Well, earlier this month I was stung on the foot while washing dishes, and within an hour I was temporarily paralyzed in a hospital wheelchair. 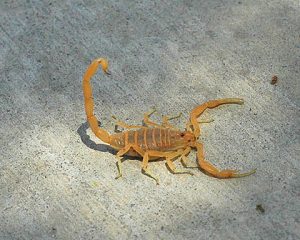 The doctor assured me this wasn’t a typical reaction to a scorpion sting, which really made me feel better as my body went into strange convulsions. It was crazy to have my mind functioning on one level and my body on another. I watched my body move, run, tremor, and shake of its own accord. I heard myself moan and gasp. Meanwhile, my mind was like, “What is this? My body is running away without me!” That’s its own brand of horror.
But after a $10-30 grand antivenin, I survived.
I actually have terrible survivor’s guilt, since it’s summer and I’m depressed and my husband is out of town. I felt terrible about spending the money. The life-saving antivenin money. It wasn’t until I priced out funerals and daycare that I realized living really was more economical. Hooray! For those who don’t suffer from depression, this will make no sense to you. For those that do? You get what I’m talking about. 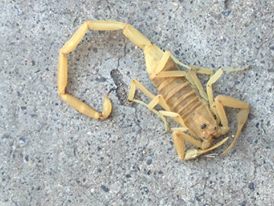 My husband was out of town on a business trip. After he called me (he says he did, anyway) he hopped a plane and flew home. Apparently I texted him while on morphine. And, no, as far as I know, we unfortunately didn’t call Europe. But he still is my boiiiiu. 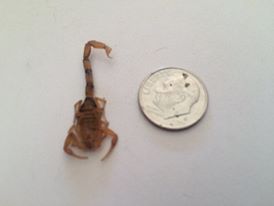 The venom caused my blood to coagulate to the point that the doctors thought I had a bleeding disorder. They apologized for making me wear these compression devices, but I was completely numb so I didn’t even feel them. Paralyzation for the win!
Miraculously, I was home in a bit more than 24 hours. It was closer than I’d care to admit, so I simply won’t admit it. I expected myself to bounce back right away, but it’s taking longer than I thought. My body is exhausted. I’m angry at being at risk in my own home. I can’t sleep because I think things are crawling all over my body.
But as experiences go, it was one I had never expected. Now I know what a scorpion sting feels like, and what happens if you have a senstitivity to it. I find that intriguing as an author, and have to use it in a book somewhere. I’m going to do a short video in the coming weeks describing it for anybody who has ever wondered what it was like. I have. If you have any questions that you’d like me to answer, I’ll gladly do so. Just leave them here in the comments. Have a great, scorpion-free day!

10 Comments on “So, That "I Nearly Died By Scorpion" Thing.”