So six days ago I clocked my noggin. It was the silliest thing! It was 112 degrees here in Vegas and my son had his bedroom window open. I leaned over to close it and smacked myself with some wooden blinds. It really rang my bell. I mean, I saw STARS, and not only did I see stars, but they didn’t dissipate for three or four minutes. I was staggering around with lights overlaid over everything I saw, and I thought, “Is this normal?”
No, it wasn’t normal. In fact, I had given myself a pretty good concussion, although I didn’t find this out until I finally saw a doctor five days later.
I’ve been asked what the concussion symptoms were and why I went in almost a week after I hit my head. I experienced:
Stars that didn’t dissipate
Headache
Confusion
Dizziness
Fatigue
Nausea
Inability to remember things
Trouble balancing
Slurring
Sensitivity to light and noise
Sinus pain
Insane irritability. Like, CRAZY insane!
A strange tasting, watery discharge that only came out of one nostril and got worse when I leaned forward
Insomnia
Most of all, I just couldn’t THINK. I was forgetting words more than usual. I mixed my social security number up with my phone number. I’d read over texts with my friends and thought they seemed a little more rambling than usual.
I just thought it would get better, but it didn’t. And I felt like something was off. More than that, though, my friends urged me to go and I appreciate that because I wasn’t going to do it on my own. Because who has time for the emergency room, amiright?
But my doctor said cool things like “Rest your brain” and “is that brain fluid or allergies? I don’t know” and “Don’t look sad. It’s a mild traumatic brain injury. You aren’t stupid.” That was my favorite. Because I did feel stupid, and I was frankly relieved that there was a medical reason for my sudden case of Teh Dumbz. 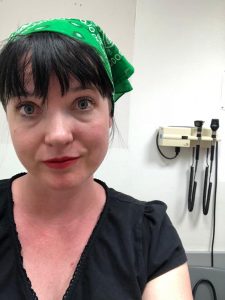 Waiting two hours to learn if I have a concussion. Hooray! I do!

When Should You Contact A Doctor?
Basically any time you suspect a head injury, a visit to the doctor is a good idea. But in my case, I finally went when the symptoms weren’t only not improving, but actually worsened. The headaches became more severe, and the watery discharge out of one nostril happened four days after the injury.
The Mayo Clinic has a great article on the symptoms of concussions and when you should see a doctor.
Suggestions for Treatment
Once you’re diagnosed, you’ll get a treatment plan. Mine was simply to rest physically and also rest my brain. Bedrest is suggested if you have a mild cerebrospinal fluid leak, which is when there is a tear in the membranes surrounding the brain or spinal cord and the fluid leaks out. If it can’t be treated at home, they might preform surgery or give you a blood patch to repair the leak.
How Do You Rest Your Brain?
Because, frankly, it seems impossible. My doctor told me to avoid anything physically or mentally taxing. For example, I’d make dinner and then have to lie down because my headache was murdering me. Following a recipe is complicated, he said. It requires thinking and acting and doing. Don’t cook. Lie down. Avoid screens. (Like writing a blog post in the middle of the night, maybe?) Sleep as much as possible.  Don’t stimulate the mind.
It’s a grand idea, but I noticed that he didn’t offer to do my work, clean my house, or tend my kids, so we’ll see how it goes. But I’ll try to dial things back.
Here’s to more of life’s grand adventures, and I hope this is some useful information should you ever need it. Later, my darlings!

2 Comments on “Miss Murder Gets A Concussion”