The city is called “Redoubt”… and so far as anyone knows, it is the last.
Seven decades ago, there were cities upon cities; kingdoms and nations, the remains of ancient empire. Cultures at war, cultures at trade. Races with varying degrees of alliance and distrust. Humans, elves, dwarves, and others; magic and monsters, rare but real. Regions of desolation, certainly, but also regions of plenty; forests, farmlands, and fields. And so it was for millennia, through two dynamic ages the lorekeepers and scribes called Ascensions.
Until the world ended. Most call it the Fall, but whatever term a given people choose to use, it marked the point where everything—everything—changed. Nations crumbled. Races died. Magic sputtered. Nature sickened.
The Dead woke.

This is a very cool project that I’m involved in. There’s a stellar lineup of authors, artists, and musicians all coming together to make this thing happen. My story is called “The Bone-Shaker’s Daughter,” and it’s a dark love story between a human, an elf, and how madness, obsession, and hierarchy play a role in this one remaining city. I sincerely hope it’s something you will enjoy. 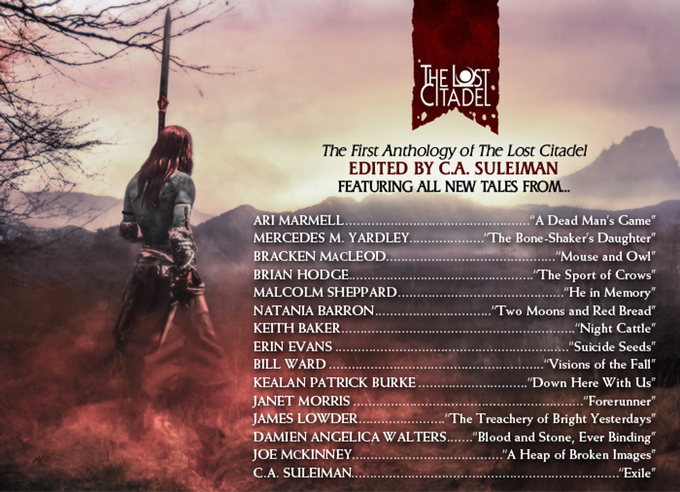 To help garner support, I’m offering a giveaway! For anybody who backs the Lost Citadel Project, contributing even as little as a dollar, I’ll enter you in a raffle for a free audiobook of my latest (and favorite!) novel, Pretty Little Dead Girls. Pretty Little Dead Girls is narrated by Khristine Hvam, and she does a beautiful job. All you have to do is contact Lost Citadel Editor C.A. Suleiman (his contact information is on the right hand side of the Kickstarter page), let him know you backed the project, and tell him what name you used so he can confirm it.  At the end of the Kickstarter campaign, I’ll pick a winner and get you your copy of the PLDG audiobook. I hope you enjoy it.

Check out this campaign. It has a lot to offer. I’m hoping it funds all of the stretch goals so we can have a soundtrack. How amazing would that be?
Have a great day, friends!

2 Comments on “The Lost Citadel. And a Giveaway!”